NOTE: I’ll be doing up a small blog for each brewery we visited so that you don’t fall asleep reading an unnecessarily long diatribe.

With a population of 81,000, Bellingham, WA (BLI) is an island of a city on the I-5. By this I mean it’s surrounded by farmland, sprawling green hills, the Pacific Ocean, and the Cascade Mountain range, so it’s pretty much all on its own.

Although not really connected like other urban style cities (you kind of have to live here to understand), it’s super close to roughly 3 million Canadians – many of whom love good craft beer but aren’t particularly fond of border lineups or a 70 cent dollar.

Currently boasting 11 breweries, with a 12th opening shortly, Bellingham offers 10 times the number of breweries per capita than my home town of Abbotsford, BC (which explains the popularity of Field House Brewing), AND more per capita than Portland, Seattle and Vancouver.

Seeming like an eternity since Sandra and I had been on a weekend getaway, we decided to escape somewhere for a couple of days. And, quite frankly, it really didn’t matter where.

Being both super close and super affordable, Bellingham seemed like a good choice. We thought we would do some shopping, wander around the old downtown area, enjoy the farmer’s market, and check-in to a brewpub or two (or three, or four).

After some quick research I was utterly shocked to find that there were 11 breweries in BLI alone. I was aware of a couple of them… But 11?

That was a game changer. Looks like the handful of visits was going to turn into a full blown holiday tap tour!!!

Gathering up a list of places of interest and breweries , I pinned them on a Google map, and a rough agenda was planned out.

We started the day off at the Farmer’s Market in the heart of downtown Bellingham. This turned into a real find, as Atwood Ales had a small stand showing off some of their crazy brews featuring locally sourced ingredients. Spent a good amount of time talking to them, savouring the samples they brought, and picked up a Triticale Brett Saison that will be going into the cellar for some conditioning. Look forward to checking out one of their brewery tours in the not to distant future.

To make this even more fun, we came across a local “Tap Trail Passport” (see below) at the “tourist desk” . With a map provided, it lists a number of supporting breweries, cideries, and tap houses where you get a unique stamp when you visit and purchase a pint. Collect enough stamps and you get a reward to acknowledge your dedication to the cause. The rewards are far from luxurious, but they are a fun incentive just the same.

Jumping back into the Prius, we headed a couple miles south down the I-5 to the Fairhaven district – a quaint area with some hip shops, restaurants, and a bit of culture. After a lazy wander around, we located Stone’s Throw Brewing, which could be easily mistaken for someone’s home, and stepped in for our first pint of the journey (11:30am – not bad). It was the perfect beginning to a perfect weekend, I enjoyed a nicely brewed pilsner lager, Sandra had a ginger ale they brew themselves, and we planned out the rest of our day.

Spending some more time in the shops, we ended up a the Filling Station restaurant for another pint ( a very nice Ten Pin Brewing Gutter Ball Hazy Pale Ale) and some lunch. This was a real jewel of a find (although not too hard to find), as the service was outstanding, the food was very good, super cool decor, and they ONLY SERVE regional craft beer.

Back to the Big City

Trekking back into Downtown Bellingham, we bounced around on foot to Gruff Brewing, Boundary Bay Brewery and Bistro, Chuckanut Brewery and Kitchen, Aslan Brewing, Structures Brewing, and finishing off the day at Wander Brewing. 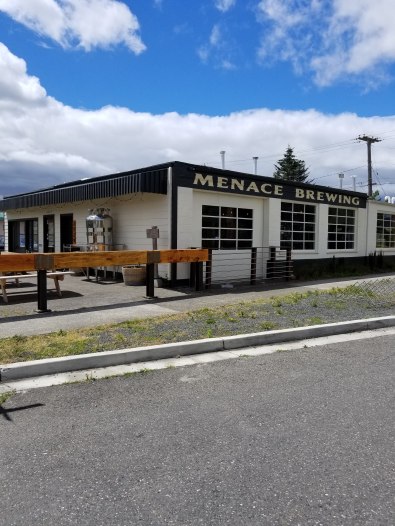 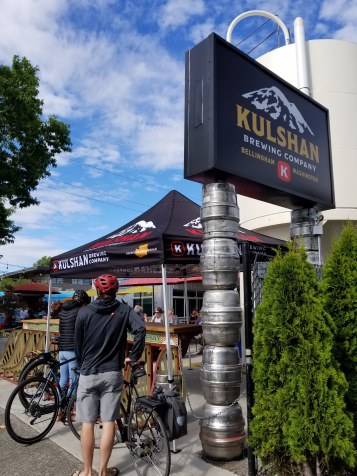 Turns out the Downtown Bellingham area is less than stellar for shopping. Sadly, even on a Saturday afternoon, more often than not the stores were closed or empty.

After a grueling, and thirst quenching day, we grabbed some relatively average Chinese takeout and headed back to the hotel. With luck, Armageddon, one of the all time great end-of-the-world apocalypse movies was just starting. The perfect movie to fall asleep to.

With leftovers on the breakfast menu (who doesn’t love leftover Chinese food?), we checked out, relaxed at a Woods Coffee across the way, and mapped out our day.

Having a current affinity for sours, we ended up going to BevMo to scour the Belgian saison selection. Although I was hoping to find an Orval circa 2018 or 2016 (already have a 2017), a Saison Dupont Farmhouse Ale, circa 2016, more than fit the bill. If you’ve never been to the BevMo in Bellingham, and you like craft beer, this is a must.  They have a very good selection of domestic craft beer, and imported goodies.

Following a pilgrimage to the new Costco, we headed down Meridian Street to Menace Brewing for the first beer of the day. Ben, the fellow behind the counter, was super obliging, letting me taste every single beer they had on tap plus one from a fermentor that they were going to be bottling shortly (an oh so nice Chile Bravo Lager).

The next stop took us a few blocks down the road to Melvin Brewing for a flight and some garlic fries. Followed by a tasty lunch and pint at Aslan, a relaxing beverage at Kulshan, Illiminati for a pint of pilsner, and down the 542 to North Fork Brewing for a pizza and a closing flight before heading home.

There were a few things that the Mrs. and I got out of our weekend getaway. The first thing we noticed was how family and dog friendly many of the places were. Waiting in line at Gruff I was greeted by a wagging tale, while the toddlers seemed just as at home at Wander Brewing as they would at a daycare. This was a definitely a reflection of the clientele and the relaxed the settings.

Second, we were amazed at how spread out Bellingham is. With only 81,000 people, there was definitely more space than human beings. This was quite evident during our wanderings of the barren Downtown district.

Finally, we were pleasantly surprised by the craft beer scene and everything it had to offer. The community seems to have embraced it, supporting everything from street parties, to a weekend brew tour bus that will escort you around to the various brewery areas for a mere $10 / person for the whole day. The taprooms and stores (even Costco) are also big supporters of the local breweries, putting their products front and centre.

There is a very good chance we’ll be making our way back to the BLI for another weekend, to enjoy the exceptional craft beer scene and maybe some of the cultural activities in the area.